Danielle Staub Fired From The Real Housewives Of New Jersey 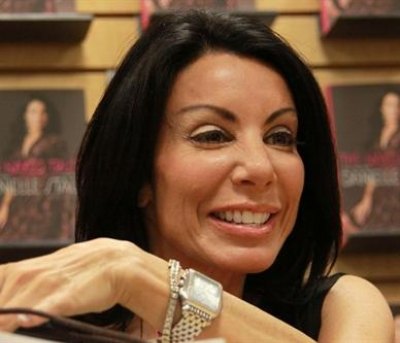 Danielle Staub has gotten the axe from The Real Housewives Of New Jersey. Bravo is trying to play it off like they aren’t really concerned with season three of the show right now, but another rumor about the reality star has surfaced. Apparently she’s getting her own spinoff!

So, doing a sex tape really does boost your career? At least that’s the message that’s being sent out by all of these people who promote the sex tape freaks. Especially the funky looking ones like this broad. Someone should have seriously considered taking up a collection for her to keep her clothes on. But I digress.

A snitch revealed, “A spinoff is in the works” and it will “loosely reflect the character she started on the Real Housewives and the future of her career, her high-profile life, her kids, her being a ‘mom-ager.’ But she also has a normal life with her assistant and the whole team surrounding her.”

High-profile life? Ummm, okay, I’m not buying that load of malarky, but whatever. The spy continued, “It’s going to be a spinoff that’s a combination of her persona that’s loosely based on her Real Housewives character and the evolution of where she is now. With Danielle, you either hate her or love to hate her.”

She also played coy with the reality show plans. When asked, she said, “Actually, I’m not even thinking about season 3 right now as I am considering many incredible options that have been presented to me. Right now I just want to let fans know that we have a fantastic finale coming up next week and explosive reunion shows on August 30 and September 6.”

Are you buying it? And more importantly, will you watch her new show???