Demi Lovato Was A Cutter Before Entering Rehab 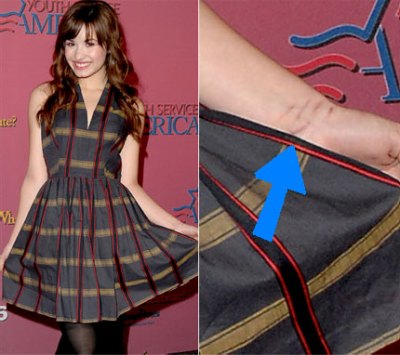 Disney singer Demi Lovato shocked the world with her announcement last night that she was cutting her tour with the Jonas Brothers short so that she could seek treatment in a rehab center.

What we were left wondering was what was the reasoning behind her decision to seek treatment. According to sources, Demi was a cutter before entering rehab…as evidenced by the photo above.

Demi was also bullied in school, causing her to withdraw in favor of homeschooling. Us Magazine reports:

In the seventh grade, she was bullied to such a degree that she had to be home-schooled, she told Ellen DeGeneres in 2008. “Sometimes [bullying] doesn’t just end in high school,” she wrote on her Celebrity MySpace page that year. “Sometimes I get online and read blogs (which I probably shouldn’t if I can’t handle it) and read the horrible things that people say in comments … and it can really take a toll on you.”

She showed up on the red carpet to Miley Cyrus’ 16th birthday party, with red marks on her arms, prompting speculation that she was cutting herself in an attempt to deal with her problems.

An inside source said, “She needed help before a smaller problem got worse. She is doing okay. She has been forced into showbiz from a young age and that puts tremendous pressure on someone … everyone is really happy she is getting help.”

Good for her for getting help. That’s the first step toward recovery.