Did Jessica Simpson Buy Her Own Engagement Ring? 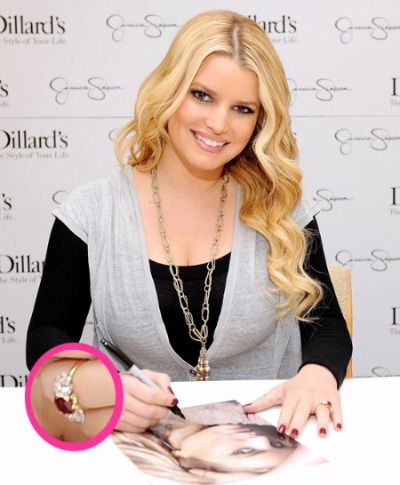 Jessica Simpson surprised all of us when she announced her engagement to Eric Johnson. It was quite the coincidence, considering that they have only been dating for five months and her ex-husband Nick Lachey announced his engagement the week before.

She was seen signing autographs on Saturday morning at a Dillard’s department store in Kansas City, showing off her new engagement ring. It’s said to be a Neil Lane ring, worth around $100,000.

A friend of Jessica’s said that she purchased the ring herself, because Eric just couldn’t afford it. The pal said, “No way could Eric, who doesn’t have a job at the moment, afford to purchase such an expensive ring. Yes, he made a little bit of money in the NFL and is from a wealthy family, but unless his parents helped him out, Jessica must have paid for it herself.”

A friend of the family said, “First, we find out that Jessica doesn’t want to have a prenup, and now we find out that she might have paid for her own ring. It just doesn’t feel right to me. We all want Jessica to be happy and finally find true love after all she has been through, but she doesn’t understand that in the long run if she pays for everything it will hurt her relationship with any man.”

Smart advice, if you ask me!

Another pal of Jessica’s said, “What’s the big deal? Jessica has more money than she can ever spend. If she wants to treat her future husband, friends or even herself to an expensive piece of jewelry, it’s her business and no one else.”

Do you think Jessica bought her own ring? If so, what are your thoughts on that?