Did Michelle ‘Bombshell’ McGee have A Brief Relationship With Pink’s Husband? 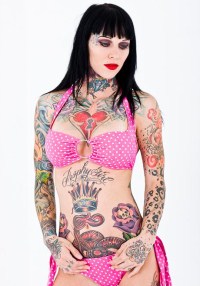 According to Michelle’s ex-husband Shane Modica the tattoo model – who had an affair with Sandra Bullock’s husband Jesse James – had sex with motocross racer Carey Hart after meeting him in 2008.

Shane told RadarOnline.com: "I knew about her fling with Carey Hart, Michelle told me that she had slept with him. She flew out to Las Vegas to see him but she was upset that they never got to spend as much time together as she expected too."   At the time Carey was separated from Pink, who he reconciled with in 2009.

A source close to Pink and Carey claims the racer and Michelle met at the ASR (Action Sports Retailer) convention in San Diego in September 2008, and got together at a private house afterwards.   Shane also claims Carey visited Michelle at a San Diego strip club to watch her perform, but the fling quickly fizzled out.   He added: "One of her female friends was friendly with Carey also and Michelle got angry that things did not pan out as they expected.   "This was before her time with Jesse James. It is so typical of Michelle because she always goes for the guy who she thinks… can help her out."