Did Tiger Woods Cheat In Rehab? 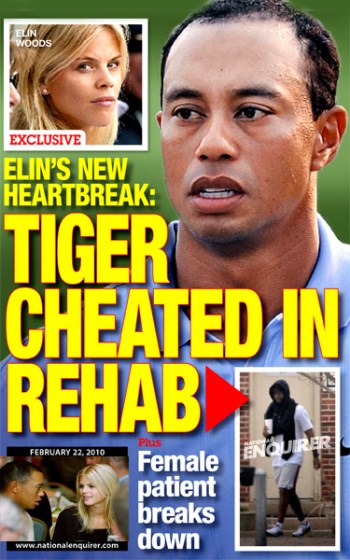 The National Enquirer is reporting that Tiger Woods cheated on Elin at rehab.  A source told the magazine that Tiger refused to admit he had a problem, made fun of other patients to the point that he made one break down and cry.  He apparently also refused to cooperate with therapists – makes sense if he does not think he has a problem.

Apparently Tiger treated the whole thing as a joke he went in because he basically had to.  His handlers felt that going to "sex therapy"  would help his tattered public image and help save his endorsements from disappearing.  Sad thing is Tiger went in a sex addict and has come out as the same sex addict – so Elin’s humiliation is probably far from over.

According to the Enquirer not only did Tiger cheat with multiple women but he cheated when he promised to go to rehab and get help.

Meanwhile Raderonline.com is reporting that Tiger Woods is in Orlando, Florida and living apart from wife Elin.  Apparently Tiger and Elin are living in separate houses in Orlando, just miles apart, and shuttling their two children back and forth.   Can’t say that I am surprised does Tiger think that Elin is going to get over all the betrayal by him so quickly.  Somehow I doubt it.