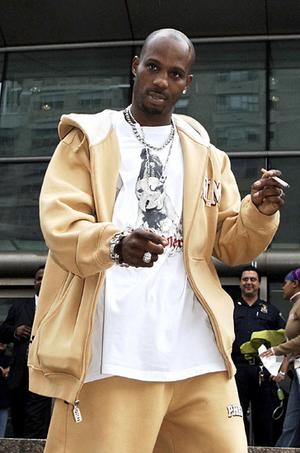 The ‘Who We Be’ rapper received the punishment at a court hearing in Phoenix, Arizona, but he may escape prison and instead be ordered straight to residential rehab.   The American hip-hop star – real name Earl Simmons – had earlier admitted to five breaches of his probation, blaming his dependence on drugs.

During DMX’s hearing the judge was presented with a letter from drugs expert Dr. Drew Pinsky asking permission to treat the star at his Pasadena Recovery Centre, an idea the judge appeared “open” to, although his final ruling has not been confirmed.   Michael Bloom, co-founder of the treatment centre, said: “We made the offer and we would take him in, if the court is OK with that."  DMX’s defence lawyer, Glen Allen, said: "If we never address the serious substance abuse issues that he has, this is an individual that we are going to see again in the wrong places. And we don’t want to see him back before Your Honour ever again."

DMX was arrested in Phoenix last week, and was on probation for verbally threatening a guard during a stint in prison last year for drug possession, animal cruelty and theft.   His manager Nakia Walker recently spoke out in favour of the rapper.   She said: “It is unfortunate and painful to see Earl incarcerated, as there are a lot of rumours and lies surfacing regarding the details of his personal and professional state.   "However, thank God for a great team- family, friends, pastors and doctors. Collectively, I am excited to say that DMX’s team is putting forth every effort to ensure the success of Earl’s health and career. We appreciate the support of his fans. Please stay prayerful, as X will return."