Do You Care? Boo Hoo Lindsay Lohan Has No “Pillow To Sleep On” In Jail 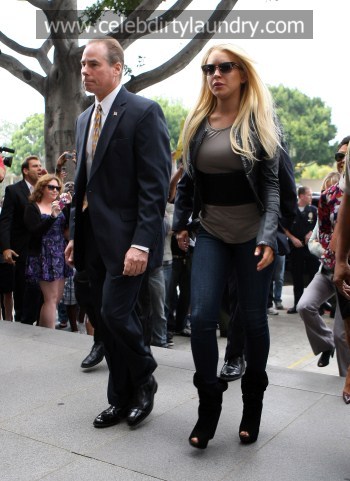 Dina Lohan insists Lindsay – who is due to be released from the Century Regional Correctional Facility in Lynwood, California, over the next few days – is being treated like every other “common criminal”, but says the guards and other inmates have been fair to her.   Not sure I see what the problem is here she is a “common criminal”  Since when did being famous make you special?

Discussing claims Lindsay has access to a cell phone behind bars, Dina said:

“She doesn’t have cell phone privileges, that’s absurd. She doesn’t even have a pillow to sleep on.   “I talk to her through glass. There’s a phone and we put her on speaker but I can’t even hug my daughter. She’s treated like a common criminal.   “I have to say that the people inside have been pretty cool to her. the guards and the inmates.”

Lindsay was sentenced to spend 90 days in prison, followed by 90 days in rehab, after violating the terms of her probation for her 2007 driving under the influence (DUI) charge.   She entered jail on July 20 and is expected to be released on either Sunday (01.08.10) or Monday (02.08.10) – when she will have just 24 hours to begin a court-ordered rehab stay.   Lindsay’s family are thrilled she is about to be released from jail and that this “extremely harsh punishment” is coming to an end.  LOL they are so fricking dilusional the girl was driving drunk she could have killed someone yoo hoo wake up Lohan family!!!

“We’re all so happy that this is finally coming to a close. When this first happened, we were all hysterical messes. But I’m so proud of Lindsay, she’s been so strong and positive, even under what I consider to be a extremely harsh punishment.”

Meanwhile, the 24-year-old actress’ estranged father Michael Lohan – who has regularly accused his daughter of being a addicted to prescription drugs – has asked the Attorney General of California, Jerry Brown, to investigate Lindsay’s doctors for overprescribing her medications.   Gossip website TMZ has got a copy of a legal letter which asks for an investigation into the “unscrupulous doctors” who “overprescribe medications to Lindsay. in violation of California law”.