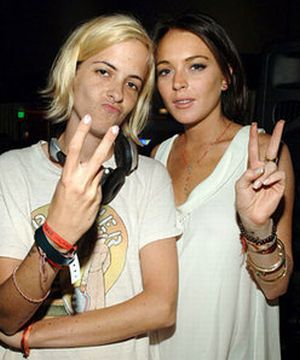 DJ Samantha Ronson – who was in an on-off 16-month relationship with Lindsay Lohan from the start of 2008 – insists she still has strong feelings for her former lover, despite the tumultuous end to their relationship.   She said: “I love her as a human being. I’m not gonna sit here and negate everything we had.  You know, I could have a thousand times countered s**t with facts. It’s just not for me.   Although Samantha – the sister of producer Mark Ronson – still cares for Lindsay, she admits the highly-publicised romance caused her numerous problems because of the level of interes.

She added in an interview with The Times magazine: “To be honest, being with her was more of a headache than anything else. Everything I was doing I was already doing (before Lindsay). It just meant there were paparazzi pictures documenting it. It sucked, because I’m a pretty private person and I’d managed to stay under the radar for so long. But at the same time I’m not gonna not hang out with somebody that I care about because of that s**t.”   Samantha, 32, also refutes suggestions she was a bad influence on Lindsay – who currently has to wear an alcohol-monitoring SCRAM bracelet as part of her probation for a driving under the influence (DUI) arrest dating back to 2007 – and is adamant she had a calming effect on her life.

The 32-year-old star – who was a passenger in the car when Lindsay, who later admitted to driving under the influence of cocaine, had the accident but wasn’t dating her at the time – said: “She was like a little kid as far as I was concerned. And then, when I met her, she was this sweet little cool girl. And we were friends for years before anything else. I feel like I was a great influence. Because as much as my life is in clubs and stuff, my personality isn’t. So we had every other time chilling. It wasn’t like I was out getting f***ed up every night.”