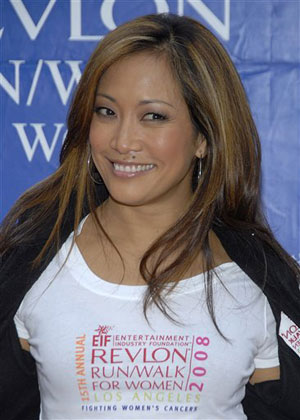 Dancing With The Stars judge Carrie Ann Inaba was at the Trevor Live benefit at the Hollywood Palladium and when she was asked about The Palin’s being on DWTS she said that we all need a Palin vacation.  Furthermore, she is not that keen to see Todd Palin on the show even if it would be good for the shows ratings.

EOnline reports  Carrie Ann said:  “I think one Palin was enough for awhile.  “I think we need to go on a Palin vacation for a minute.”   “Although it was great media attention, I think it was too controversial,” Inaba explained. “I think people got confused about what they were rooting for: Are you voting for dancing on the show or are you voting for a Party?  “I think that made it very uncomfortable for a lot of people who just want to see a dance competition. I like to keep it simple. I think it diluted the nature of the competition.”

I could not agree more – Bristol Palin being on the show last season took the focus off all the dancers and put it on Bristol.   A lot of dancers that were far better than Bristol went home before her.   I am so Palined out at this point and I am not even sure if I will tune into the show next season.  How about you?  Will you watch the next season of Dancing With The Stars?