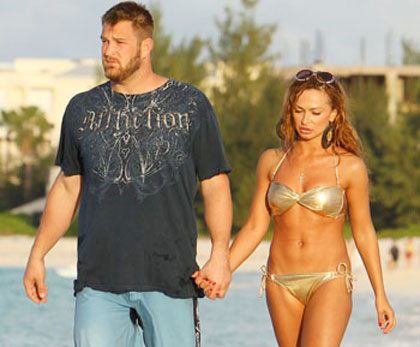 Dancing with the stars Karina Smirnoff, 32,  got engaged to Brad Penny November 4th, 2010.  Brad who played baseball last year for the St. Louis Cardinals presented Karina with a  4.5 carat Asscher Cut diamond engagement ring at Tao Las Vegas’s five-year anniversary party.   The couple have dating since 2009 shortly after she broke up with Maksim Chmerkovskiy.  The two were introduced by UFC fighter Chuck Liddell who was on DWTS as a contestant.

The two confirmed to People:

“We kept it quiet because my family is in New York and Brad’s family is in Oklahoma so we kind of wanted them to come out and celebrate and be a family first before we let the cat out of the bag.”