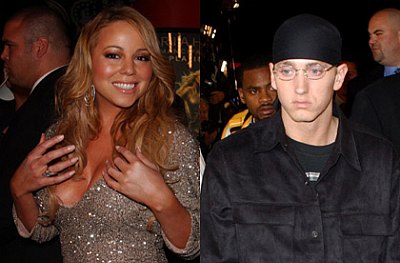 We’ve finally gotten to the real story behind the long-standing feud between Mariah Carey and rapper Eminem. After years of attacks, songs and threats, we’ve got the dish.

Apparently, while Shady was casting for his movie, 8 Mile, he asked Mariah to be a part of the movie. Now, Mariah being the wonderful diva that she is, thought she was going to get the role of Alex, Rabbit’s girlfriend. As we all know, that part went to the late, great Brittany Murphy.

As it turns out, she was really sought to be cast for the part of Rabbit’s mother, Stephanie Smith, which was landed by Kim Basinger.

Instead of the casting propelling the two apart, they grew closer together and formed a relationship. Of course, they have since split, but the feud still remains.