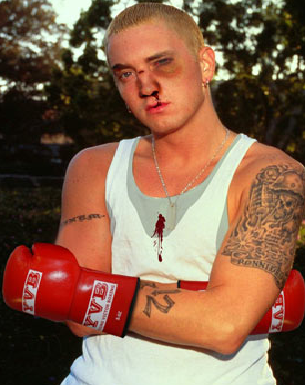 Eminem is being lined up to play a Champion Boxer who hits rock bottom and has to fight to gets his life back  in the new Dreamworks movie Southpaw.  Kurt Sutter the creator of Sons of Anarchy is at the helm.  This would not be the first film for Eminem he starred in 8 mile a movie loosely based on his life in 2002.

Sutter said: “I’ve had a bunch of meetings with Marshall’s producing partners, and I know he’s very selective and doesn’t do a lot.  “But he shared so much of his personal struggle in this raw and very honest album (Recovery), one that I connected with on a lot of levels.  He is very interested in the boxing genre, and it seemed like an apt metaphor, because his own life has been a brawl.”

“He’ll play a world champion boxer who really hits a hard bottom, and has to fight to win back his life for his young daughter.   At its core, this is a retelling of his struggles over the last five years of his life, using the boxing analogy.”

I liked Eminem in 8 Mile he did a great job but this movie is sounding a little to Rockyish to me.  What do you think?  Would you go see it?