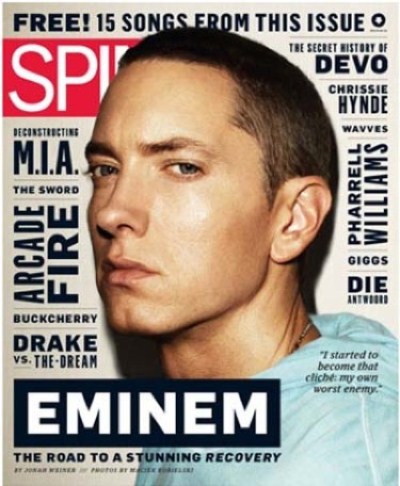 Eminem pictured above in August Spin Magazine talks about his road to recovery.   Elton John helped Eminem get clear of a four year addiction to pain killers.  Elton’s own drug use allowed him to give Eminem valuable lessons.   Eminem still calls Elton John for counsel because staying sober is difficult and a constant battle.   Eminem recently told spin magazine:

“Elton John calls me once a week. He used to tell me stuff like, ‘You’re going to start seeing certain things you’ve been overlooking’. And it came true.  I’d walk around like, damn, that tree does look crazy, look at all those leaves!’ Things I didn’t notice when I was f**ked up.”

The interview was done while he was finishing “Recovery” his recent album.  I am a massive Eminem fan, I have actually been a fan since high school.  I recently bought “Recovery”.    What can I say after the release of the mediocre “Relapse”  Eminem is back.    Recovery is anything but mediocre Eminem sounds confident and clearheaded.  When all is said and done the album is golden don’t miss getting a copy and pick up a copy of  August issue of Spin.