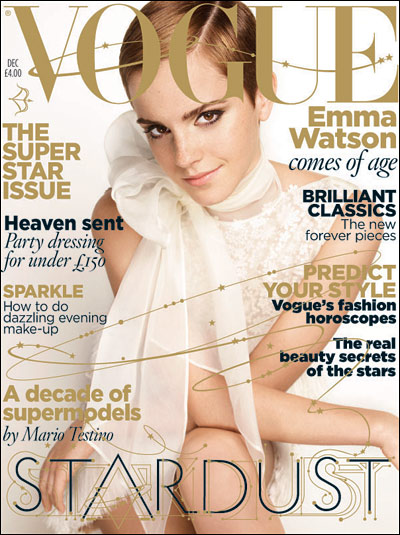 Emma Watson, 20,  who is famous for playing Hermione Granger in the Harry Potter movie series,  graces the December 2010 cover of Vogue UK.    The cover was shot by Mario Testino and Emma looks simply stunning.  In the interview Emma speaks about her eight Harry Potter movies and how emotional the ending of Harry Potter is for her.  She also speak about being stunned when she learned she was a multi-millionairess.  She said:

“By the third or fourth film, the money was starting to get… serious. I had no idea. “I felt sick, very emotional.”

Emma also reveals that at the end of the Harry Potter films she decided to cut her hair and do all the things normal girls do.  For her Harry Potter contract she was had to agree not to cut her hair, not to pierce her ears and not to get a tan.  She also speaks about her family and how important her father is to her.