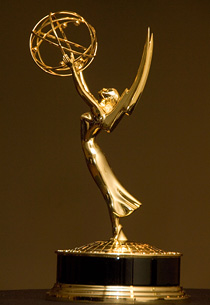 ‘Glee’ goes head-to-head against ‘Curb Your Enthusiasm’, ‘Modern Family’, ‘The Office’, ’30 Rock’ and ‘Nurse Jackie’ in the Best Comedy Series category, giving it the opportunity to break ’30 Rock’s’ three year run of wins.   Mad Men’ – the tale of an advertising agency in the 1960s – picked up 17 nominations, including Best Drama Series against ‘Breaking Bad’, ‘Lost’, ‘True Blood’, ‘The Good Wife’ and ‘Dexter’.

Tina Fey joked about her selection in the Best Comedy Actress category for her role in ‘30 Rock’, saying: “This is great and exciting news. Also, this seems like an appropriate time for me to announce to NBC that I will not be renewing my contract – with my gym.”

A number of British stars also received nods – both Dame Judi Dench and Dame Maggie Smith will compete for the prize in the Best Actress in a Miniseries category for their roles in ‘Cranford’ and ‘Capturing Mary’ respectively, while Sir Ian McKellen has been nominated in the equivalent male category for his performance in ‘The Prisoner’.   Jimmy Fallon will host this year’s awards, which will broadcast live from Los Angeles on August 29.

A summary of the 62nd Annual Emmy Awards nominations:

Outstanding actress in a drama

Outstanding actor in a drama

Outstanding supporting actor in a drama

Outstanding supporting actress in a drama

Outstanding actress in a comedy

Outstanding actor in a comedy

Outstanding supporting actor in a comedy

Outstanding supporting actress in a comedy

‘The Pacific’
‘Return To Cranford’