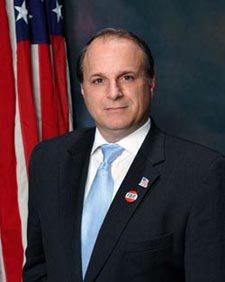 Via Politico Rep. Eric Massa (D-N.Y.) will not seek re-election after only one term in office.   According to several House aides – on both sides of the aisle – the House ethics committee has been informed of allegations that Massa, who is married with two children, sexually harassed a male staffer.

Massa, whose departure endangers Democrats’ hold on a competitive seat, told POLITICO Wednesday afternoon that no one has brought allegations of misconduct to him.   Asked about the sexual harassment allegations, Massa said: "When someone makes a decision to leave Congress, everybody says everything. I have health issues. I’ll talk about it [later].”

Massa recently suffered from non-Hodgkin’s lymphoma, and he has said that his experience with cancer drove his interest in running for office so he could help reform the health care system.

A 20-year Navy veteran, Massa was elected to office last November. He serves on the Agriculture, Armed Services and Homeland Security committees.   Massa is scheduled to hold a conference call at 3:30 this afternoon to announce his decision, which came as a complete surprise to several of his freshman Democratic colleagues in the New York delegation.

Massa has played a gadfly-like role in the House, calling for a single-payer health care system at a conference of liberal activists last year despite representing a Republican-leaning district. He was one of 39 House Democrats to vote against health care legislation; he said it didn’t do enough to control costs.   As a freshman representing New York’s most Republican House district, Massa was one of the most endangered Democrats in the delegation. Republicans had been aggressively targeting his seat and landed top recruit Tom Reed, the Republican mayor of Corning, to challenge him.

Massa is now the 15th House Democrat to announce retirement plans, with 11 of them leaving districts that Republicans are aggressively contesting. House Republicans face 19 retirements within GOP ranks, but most of their departing members hail from safe seats.   Massa’s departure also adds to the woes of New York Democrats, who have been on the defensive this week amid a scandal surrounding Gov. David Paterson, who announced he wasn’t running for election, and the tribulations involving embattled Rep. Charles Rangel (D-N.Y.), who stepped down as chairman from the House Ways and Means Committee Wednesday.