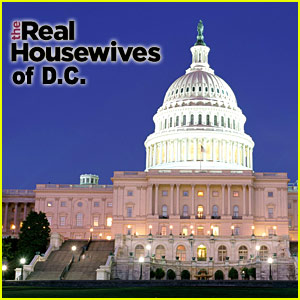 Sending all the wrong signals as usual, TV has rewarded the dishonest obnoxious behaviour of one of the White House gate crashers.  The idiot Michaele Salahi, the female half of a couple who slipped into a White House dinner uninvited, will star in a reality TV show. Sure – lie and trick your way past security into the White House and get rewarded with a TV show. That is the way we do it in America!  This is very screwed up.

The 44 year-old platinum blond former model has been hired by Bravo television as one of five stars of its series "The Real Housewives of DC" which starts in August.   As in its related Real Housewives series filmed in New York and Orange County, California, viewers get an inside look at the lives of wealthy women who appear to find plenty to keep themselves busy.  Michaele Salahi and her husband Tareq, who have a wine business outside Washington in the state of Virginia, stirred things up in Washington last November when they poked a hole in White House security and barged into a dinner for Indian Prime Minister Manmohan Singh.   The couple paraded around greeting people and being photographed with famous guests such as Vice President Joe Biden, and finally shaking the hand of President Barack Obama.

A big fan of the party circuit and charity events, Mrs. Salahi made it publicly known on her Facebook page that one of her goals was to become famous enough to be picked to star in a reality show. Bravo says on its website that "through her involvement in the Polo Cup, which has become one of the largest and most high profile polo events in the US, Michaele has met numerous political leaders across the globe."  Bravo is lying of course and one hopes that Salahi is unable to fulfill her role on the TV show because she will be busy in court – defending herself against the many charges that should be brought against her and her creep husband Tareq. Authorities are still determining whether they will prosecute the Salahis. Hopefully this appointment to reality TV will encourage the authorities to nail these two.