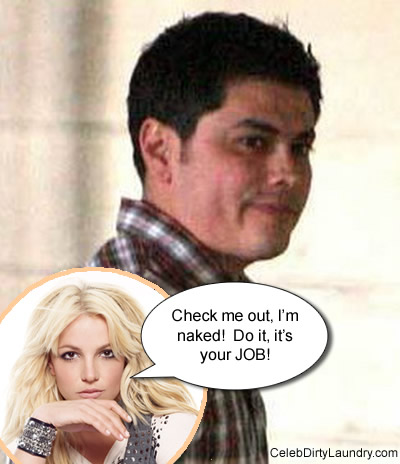 Remember Fernando Flores? Yeah, we didn’t either, so don’t beat yourself up too much over it. He’s the former bodyguard for Britney Spears who claimed that she sexually harassed and “abused” him.

TMZ reports all of the dirty details of the suit:

Flores alleges, on one occasion — in a scene right out of “Legally Blonde” — “She was wearing a white lace, see-through dress. She walked over close by [Flores], intentionally dropped her cigarette lighter on the floor, bent over to retrieve it and thereby exposed her uncovered genitals to [Flores].” The lawsuit goes on, “The incident caused [Flores] shock and disgust.”

The suit then goes on to describe another alleged instance where Britney summoned Flores to her room, where she was standing naked. The suit claims, “After an awkward silence during which [Britney] just stood naked before [Flores], [Flores] asked Spears if she needed anything. After some hesitation, Spears asked [Flores] to get her two bottles of 7 Up.”

Okay, so you have an insanely popular singer who has been known to be a sex symbol. She exposes herself in front of you – something not a lot of people can say….and you claim sexual harassment?!??

Some men would just call him lucky. This lawsuit is a farce and it is expected to be shot down by Britney’s reps in 3…..2….1….

What do you think???