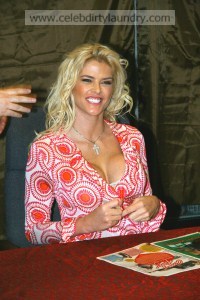 Gold-digging courve Anna Nicole Smith married Howard Marshall the billionaire when he was 89 and she 26 – the marriage lasted 14 blissful months before the altercocker died. Immediately the ANS and her pimps went charging after the money sparking a prolonged legal battle over his 1.6-billion-dollar estate.  Finally the 9th District Circuit Court of Appeals for California ruled against ANS’s estate claiming Marshall never intended to leave ANS the oil money. Good decision – Does a victim ever decide to willingly give their blood to a vampire?

At the time of her death from an accidental drug overdose in a Florida hotel room in February 2007, Smith’s will — which had not been updated — left all her wealth to her son Daniel, who had died six months earlier, with attorney Howard Stern assigned as the estate executor.   The person who had stood to gain from her estate was Smith’s daughter Dannielynn Hope, born in September 2006, who was at the center of a court battle over a fortune in the hundreds of millions of dollars.

When Smith died, the identity of the girl’s father was unknown.   Stern, actress Zsa Zsa Gabor’s husband Frederic van Anhalt and celebrity photographer  Larry Birkhead all filed paternity suits claiming they were the father. What lowlifes… .  Birkhead was determined to be the girl’s father. It remains unclear whether he will pursue further litigation.   In any case we hope he gets everything he deserves – which is NOTHING!   I mean prostitution is bad enough but the pimps surrounding the courve are even worse.  Photo: Fame Pictures