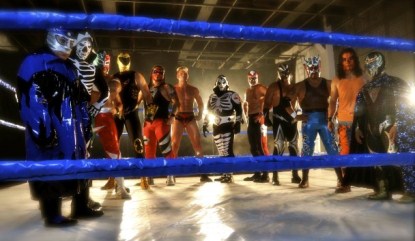 David and Reid Flair, sons of the “Nature Boy,” Ric Flair, will be appearing at the Lucha Libre USA Masked Warriors extravaganza in Charlotte, North Carolina on August 28th.  Reid will be managed by big brother, David, in a “Sons of Legends” tag-team match at Charlotte’s Bojangles Coliseum when he squares off against Tinieblas Jr, son of the famous Mexican luchador, Tinieblas.

“It’s an honor to make my national television pro wrestling debut on Lucha Libre USA Masked Warriors,” stated Reid Flair. “Lucha Libre is all about tradition and heritage. Pro wrestling has meant the same in the Flair family my entire life.”  “For weeks I’ve heard about how Tinieblas Jr. believes his father is the most legendary and respected luchador/pro wrestler in the history of our business. David and I take great exception to that. I look forward to facing Tinieblas Jr. on the 28th and we’ll find out then, who the better second generation wrestler is.  I can tell you one thing; our hometown of Charlotte will definitely be on our side; Oriental and Tinieblas Jr. better be ready for that.”

Lucha Libre USA will have additional stars on the Charlotte card from its popular MTV2 show; performers like Marco Corleone, Lizmark Jr., and Mascarita Dorada.  More wrestling royalty will be represented in Charlotte by Pam Allyn, daughter of the late Gordon Solie, and her husband, Robert, who will be on hand for a book signing.  The Allyns along with David and Reid Flair were in attendance when Gordon Solie and Ric Flair were inducted into the WWE Hall of Fame, Class of 2008.

Lucha Libre USA is the new English version of the wrestling phenomenon which is second only to soccer in Mexico.   MTV2 and Tr3ìs: MTV Música y Más is airing 52 weeks of “Masked Warriors,” the first English language Lucha Libre series in history.  For interviews with the wrestling stars of the Lucha Libre USA Charlotte event, please call Gala Delmont at (646) 519-3517.

Limited amount of VIP tickets include a special meet-and-greet and autograph session with Lucha Libre USA stars one hour before doors open!