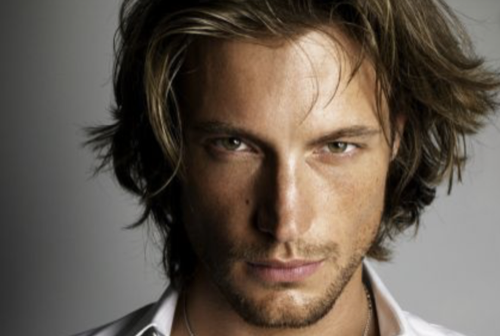 What’s not to love about Halle Berry’s ex-boyfriend, Gabriel Aubry he looks amazing in this new pic!

It must be “hot guy day” in the celebrity world and I wasn’t made aware until now. I’m not exactly sure what Charisma is or why he’s shilling for them, I haven’t taken my eyes off of the hotness, but just long enough to write this. Again, you’re welcome.

After scouring the internet earlier for pictures of Alexander Skarsgard naked (I know, my job is so hard), I came across this beauty and thought that it must be my birthday.

Pop Eater reports that the campaign also features another shot of Gabriel, in only a white towel.

The campaign — which also features Aubry in a white towel, bare torso, of course — was shot by Tony Duran. If you want to drape yourself in sexy sheets like Halle’s former man (and father of their 2-year-old daughter, Nahla), head to Bloomingdale’s.

Umm, yes, thank you, may I have another?