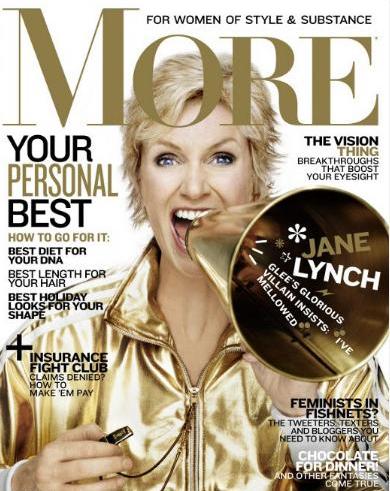 Glee’s star Jane Lynch graces the November 2010 cover of More magazine.    A surprisingly racy photo shoot coming on the heels of the recent GQ racy photos of the Glee cast.  (photos after the jump) Jane who plays the coach of the cheerleading squad on Glee poses with three almost naked guys.

Last week GQ featured three Glee cast members and the photos are causing raised eyebrows. The Parents Television Council said the magazine’s photo shoot “borders on pedophilia,” adding it is “disturbing that GQ, which is explicitly written for adult men, is sexualizing the actresses who play high school-aged characters on ‘Glee’ in this way.”

Glee, a sometimes dark, subversive comedy featuring a high school choir, has taken pop culture by a storm since its debut.  Stars like Madonna, Briteny Spears and Lady Gaga agreed to license their song to the show.  Some say Glee has never been a children’s show since it deals with such topics as pot, teen pregnancy and sexuality.  However, others say the GQ photo shoot is just creepy.  What do you think?  Is the GQ photoshoot and the More Magazine  photoshoot just Glee taking advantage of the concept that “sex sells?”