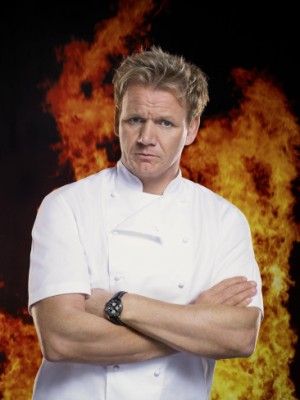 There is no love lost between Gordon Ramsey and Jamie Oliver but Gordon not known for his delicate manner made a few nasty comments about Jamie during a promotional tour of Canada.  Gordon was in Toronto at The Bay promoting his new line of cookware when he decided to make a few snide remarks.  In between cooking lessons and signing the cookware Gordon told customers he was a chef while Jamie was just a cook.  He also mentioned that Jamie needed to go on a diet.  The two have had an on going battle for some time.

Last year, Ramsay admitted he was not a fan of Oliver, describing him as a “one-pot wonder”.  ‘Everything kind of gets mixed in – hands in,’ he said of Oliver’s cooking methods. ‘He sticks it in the oven, it comes back three hours later and it’s done.  ‘We cook differently. I use basic ingredients taken up with a lot more excitement.  ‘But competition is healthy,’ he added. ‘It’s good to have that kind of rivalry.’

No surprise for Gordon to be so rude and foul mouthed – it really is what I like about him he does not mince words he says it how he sees it.  However, maybe with the mess in Gordon’s life right now he should concentrate on fixing that rather than causing more public controversy.