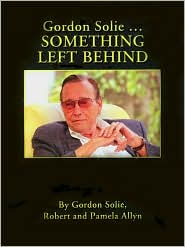 Gordon Solie is frequently remembered as the best announcer in the history of professional wrestling.  Before that he was one of the pioneers in stock car racing and an award winning radio broadcaster.

If there’s a credible wrestling Hall of Fame out there, Gordon Solie has been inducted; such groups include World Championship Wrestling (WCW), National Wrestling Alliance (NWA) and World Wrestling Entertainment (WWE).

The "Walter Cronkite of wrestling," or the "Dean of professional wrestling announcers," as Solie was known, kept rare photos from his involvement in stock car racing and wrestling.   Now, 200 images from the Gordon Solie Collection are woven through his writings in the new eBook "Gordon Solie…Something Left Behind." (ISBN 978-0-578-04808-6 (previously Hardback ISBN 0-9763062-290000)

Solie’s daughter, Pam, spoke about publishing the new eBook, "Dad was known for his extensive vocabulary and his ability as a great story teller. Those qualities are evident in his writings. I am pleased by all the compliments I’ve received in regard to Dad’s writings.   "He was also a pack-rat and for that I am thankful because he kept some great photos from both racing and wrestling. It’s exciting that people can now download images, from the Gordon Solie Collection to their desktop, laptop or eBook reader for less than ten dollars.

"There are pictures of Dad with Sterling Golden (before he was Hulk Hogan), Harley Race, Ric Flair, Andre the Giant, Dory and Terry Funk, Jack Brisco, Lou Thesz, Dusty Rhodes, Ted DiBiase, Roddy Piper, Ricky Steamboat and many, many more. Along with that, there are some great mementos from his involvement with stock car racing.   "Gordon Solie Enterprises, Inc. just launched a website called www.soliesports.com to introduce the new eBook and as time permits, we plan to add audio/video of Dad along with more memorabilia."