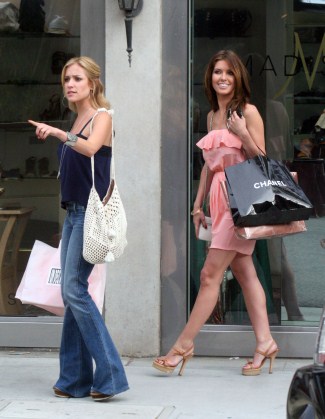 Former enemies "The Hills" reality stars Audrina Patridge and Kristin Cavallari are all smiles as they finish up a shopping trip in Beverly Hills, CA on April 15, 2010.

The two had a very public feud when Audrina was on the Ryan Seacrest show and she confessed how she feels about Cavalllari,  “I don’t like her,” Patridge confessed

Patridge wouldn’t reveal all of the details but told Seacrest,   "When someone gets in my face, I have to defend myself. And, you guys, I mean, I can’t say much. They’ll show it, but I mean, all I have to say is, it’s really pathetic and desperate what people will do when the cameras are around.”   It was my birthday, and I was like, Oh, my God. Is this what we’re going to have to deal with?’” she added.

From the picture above it seems that Audrina has gotten over her problems with Kristin.  They look like they are BFF’s again.