Gwyneth Paltrow Proved She Can Sing At The CMA Awards [Video] 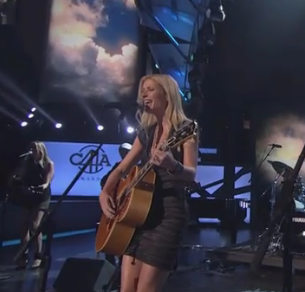 Gwyneth Paltrow sang the title song to her new movie ‘Country Stong’ at the 2010 CMA Awards last night.  I am not a huge fan of country music but have to admit her performance was impressive she can sing.

Country Strong is a  drama centered on a rising country-music songwriter (Garrett Hedlund) who sparks with a fallen star (Gwyneth Paltrow).  Together, they mount his ascent and her comeback, which leads to romantic complications involving her husband/manager (Tim McGraw) and a beauty queen-turned-singer (Leighton Meester).

The movie will be released January 2011.  After seeing Gwyneth in this video I think there is little doubt she has a future in country music.  What do you think?