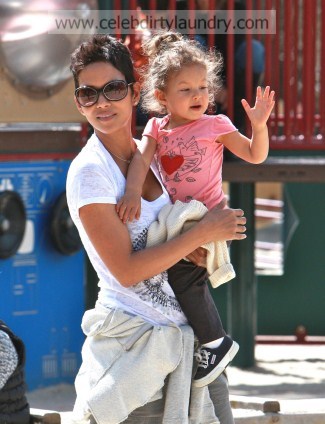 Halle Berry and the French-Canadian model Gabriel Aubry – who have a two-year-old daughter Nahla Ariela Aubry together but are not married – have ended their romance and are currently working out financial and custody arrangements, according to RadarOnline.com.

It was Gabriel, 34, who allegedly decided to call time on his five-year relationship with 43-year-old Halle and their nine-year age gap is believed to have been a factor in his decision.   A source said: “Gabriel just felt it wasn’t working anymore. When they were first together the nine-year age difference between them didn’t faze him, she was the most beautiful woman he had ever dated and he was totally in love. But as time went on he started feeling it more and more. He felt he needed to break it off with Halle."

The relationship ended a couple of months ago and Halle has been using the services of Judy Bogen, a family law attorney from Beverly Hills law firm Hersch Mannis and Bogen, to sort out custody conditions for Nahla and various financial matters.   The source added: “Gabriel’s main concern was custody of Nahla, he loves that little girl more than anything, and wanted 50/50 joint physical custody of her, which Halle agreed to.

"Financially, Gabriel earns a decent amount from his modeling career, in the region of $700,000 per year, so he’s comfortable and he didn’t want a dime from Halle.   "All Gabriel has asked for is the house  they own together in Canada. Halle put the full deposit down on the house but Gabriel has made every one of the payments since. Halle agreed right away.   "As much as it can be it’s been an amicable split.”

Unlucky-in-love Halle is no stranger to break-ups.  The Oscar winner’s first marriage to David Justice, a former baseball player, ended after four years in 1997.  Her second union to musician Eric Benet imploded after four years when the ‘Monster’s Ball’ star discovered he had cheated on her.   After two failed marriages Halle vowed not to wed Gabriel because she didn’t need to be a wife to be happy.   She said: "I will never marry again. I have a good healthy love for myself and love in my life. I no longer feel the need to be someone’s wife and I don’t need the validation of a marriage certificate.”  Photo: Fame Pictures