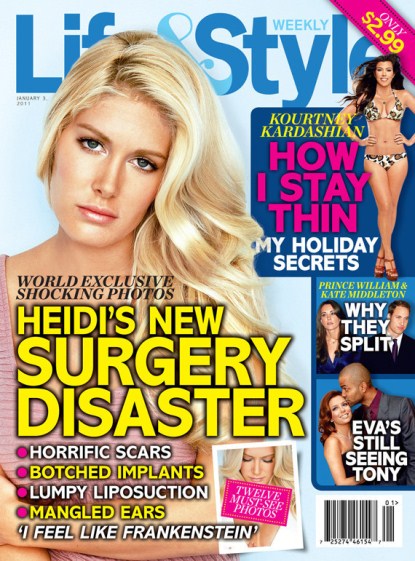 It has been one year since Heidi Montag underwent 10 plastic surgery procedures to make herself look perfect.  Heidi is saying a year later that what she is left with is regret and scars.  I don’t mean to sound cold hearted but what exactly did she expect to happen when she had ten plastic surgeries?  It was completely her choice to get these procedures – seems to me she is just whining because she does not like everyone making fun of her – I can’t buy her tale of woe – can you?

Heidi tells Life & Style magazine:  Heidi Montag was seeking perfection when she famously underwent 10 plastic surgery procedures in November 2009. Now a year later, Heidi reveals her operation-room battle wounds for the first time to Life & Style. “Parts of my body definitely look worse than they did presurgery,” she told Life & Style exclusively at a photo shoot on Dec. 2. “This is not what I signed up for.”

The former Hills star reveals a series of unsightly scars, red inflammation and uneven body parts including: a 2-inch-long raised blemish under her chin from her chin reduction, two caterpillar-size bald spots along her hairline from a brow lift, a horrifying jagged line behind her ears from having her ears pinned back, lumpy legs and four spots left on her lower back and below the buttocks from botched liposuction, a bright-red mark inside her right nostril, uneven boobs, a stretched mark on her chest and deep scars around her nipples from a second boob job.

“The big dark mark from my chin reduction is probably the most noticeable. But the absolute worst is on my breasts, and the scariest is below my butt cheek,” Heidi tells Life & Style. “People have fewer scars from car accidents than I have on my body.” 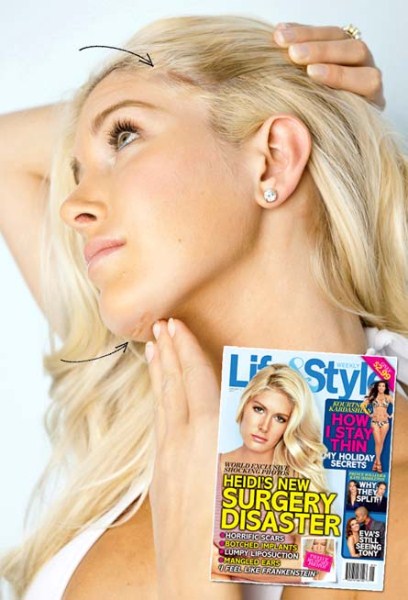