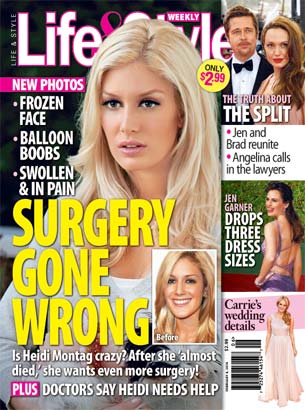 After Heidi’s recent "full body makeover" which reportedly cost a whopping $50,000 Heidi has been bombarded with hate mail.    Heidi who proclaims she is very spiritual was hurt by claims that what she has done is against God’s will.  hmmmm ya think?

This is not Heidi’s first experience with plastic surgery she had her breast augmented and her nose done in 2007.  Fast forward till this month when Heidi has had ten surgeries in one day – yep not a typo ten frickin surgeries.   Heidi is only 23 years old and she has taken what most people would thing very extreme steps as a matter of fact is seems she has gone way overboard.  Heidi has turned herself into a plastic looking Barbie doll.  However according to Life & Style magazine Heidi does not think she has nor does Janice Dickinson.

"Every starlet is getting surgery every other day to keep up her looks," says Heidi. And supermodel Janice Dickinson thinks Heidi shouldn’t make any apologies for her surgeries. "She looks fantastic," Janice tells Life & Style. "And she loves the fact that she’s being compared to Pam Anderson, which, in my mind, she very well could be." Janice’s only gripe? She thinks Heidi is destroying Dr. Ryan’s reputation by saying she almost died. "Any time anyone comes out of anesthesia, you’re going to be weirded out," says Janice. "Personally, I live for it."