Holly Madison Is Moving In With Benji Madden 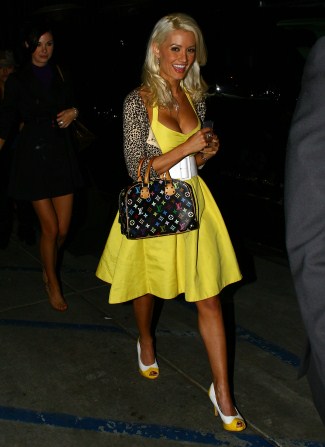 The former Playboy model and the Good Charlotte rocker – who previously dated socialite Paris Hilton – are reportedly thinking of buying a house together, even though they have been dating for just three months.   A source told In Touch Weekly magazine: “Benji cares very much for Holly. They have been talking about living together.”

Holly – who is a former girlfriend of Playboy founder Hugh Hefner – is currently starring in Las Vegas burlesque concert ‘Peepshow’.   Last week Benji, 30, also recruited her to appear in a video for band IT BOYS! – who he discovered– and the couple amazed onlookers with their flirty behaviour.   A source on set said: “Benji kept telling her how amazing she looked. They couldn’t keep their eyes off each other.”

Benji may be looking to settle down with Holly, as he recently revealed he is worried he is getting old.   The guitarist said he can never trust college students because of the way they look and talk, but realises his statement makes him sound like a grumpy old man.   He tweeted: "College kids with their big words and their sandals and their funny hair. I don’t trust ’em (sic)."
He then wrote: "Last tweet=sure sign that I’m getting old. FVCK (sic)."   Photo: Fame Pictures