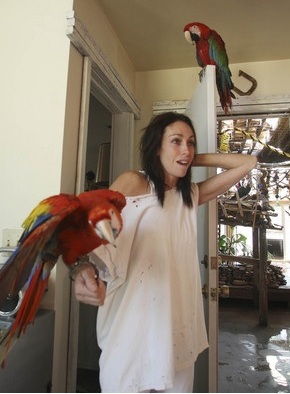 Looks like Heidi Fleiss has little to be thankful for this Thanksgiving as her home had a serious fire that day causing over $60,000 damage.  It destroyed her guest house and part off her home but the worst was that she almost lost her birds to the fire.

Heidi is a serious pet owner – with 20 great birds that she relates to remarkably well – but fortunately she kept them safe which was not easy as they were resident in the guest house that burned to the ground.

She lost the entire guest house (where she keeps her birds), almost all her clothes, and her Tempur-Pedic mattress was ruined.   The former madame says her 20 birds are all safe and she has to make sure she boards off the bird room so that no toxic vapors harm her fine feathered friends.

Heidi has not had an easy time of things since her arrest in June 1993 when she was probably the most successful Madam in Los Angeles/Hollywood making over $10,000/day!  Since then she has done multiple rehabs for multiple drug addictions and photos show a sad, bitter, burned out woman, with way too much bad cosmetic surgery.

Anyway – luckily she saved her birds.