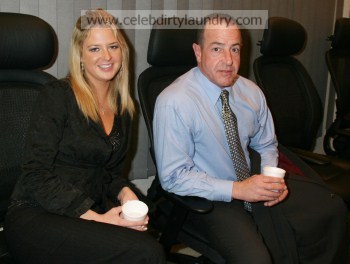 Kate Major, fiancé of Michael Lohan and former girlfriend of Jon Gosselin, will fight film star, Gina Lynn at Celebrity Boxing 19. Major replaces another past Gosselin female companion, Hailey Glassman, who was originally slated to duke it out with Lynn.

At the May 7th Philadelphia bout brought to you by www.number1smoke.com , Kate Major will have Lohan in her corner as she boxes under the supervision of referee, Michelle “Bombshell” McGee, the alleged mistress of Jesse James.

“My name has been all over the news, but I am going to put all the Hollywood glitter aside when the bell rings. I am putting on the gloves for one reason! I want to knock out my opponent!” declared Major.

Part of Major’s confidence stems from the fact that her fiancé will provide her with more than just moral support for the upcoming ladies boxing match.   “I am the current Celebrity Boxing Federation Heavyweight Champion!” barked out Michael Lohan. “I am personally going to train Kate for her upcoming bout!”  Photo: Fame Pictures