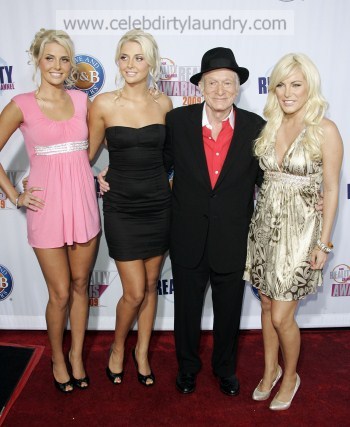 The media mogul initially asked twins Karissa and Kristina Shannon to move from the Playboy Mansion to the adjoining Playmate House after his relationship with Crystal Harris grew more serious, but they have now moved out of the estate completely due to the 84-year-old magazine founder’s unhappiness at them having boyfriends.

Karissa – who has moved in with actor Sam Jones III, who she has been dating for four months – explained: "After a couple of weeks, Hef was getting a little bit upset about the boyfriends, so he wanted us to move out. We need to update people about what’s going on.   "We were not allowed to have boys in the house. That was the absolute number one rule – no boys allowed. That was one of the main reasons we moved out.  "But living there and being seen out with other guys, Hugh was tripping."

While Karissa is settled in her love life, Kristina recently split from her ‘Somewhere’ co-star Stephen Dorff because they didn’t want a long distance romance.   Kristina explained to PopEater.com: "There was serious attraction. We really seriously dated for a month.   "He said he was going to be gone for six months and I’m here in Los Angeles. We’re still friends. It wasn’t a serious hardcore thing. We weren’t fighting or anything."

Hugh recently insisted he thought it would be a “good idea” for the 20-year-old twins to move out of the Playboy Mansion.   Speaking about suggesting the move to them, Hugh said: "When they thought about it, they thought it was a good idea. They will now be friends, but they won’t be defined as the girlfriends.   "They’ve been hanging out with a lot of the other Playmates and they see these girls travelling across the country to do promotion. They would like to be doing that, too."  Photo: Fame Pictures