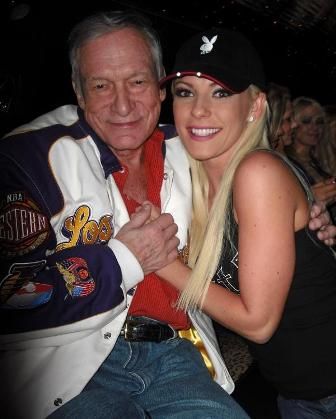 The founder of the Playboy franchise 84-year-old Hugh Hefner is getting married to former playmate 24-year-old Crystal Harris.  For Hugh this will be his third marriage, not at all bad by Hollywood standards, and his blushing bride Crystal will tie the knot for the first time.

Hefner, an avid twitter fan, tweeted:  “When I gave Crystal the ring, she burst into tears, this is the happiest Christmas weekend in memory.”  Of course in Hugh’s case we are not sure if he can remember even the previous Christmas – LOL.  And the young at heart stud added “Yes, the ring I gave Crystal is an engagement ring,” when friends asked.

When asked if he were capable of a monogamous lifestyle, given his much publicized sexual frolicking with 3 women on the reality show “The Girls Next Door” he answered “I was married and completely faithful for eight years,” adding “I lived a single life, a playboy lifestyle, before and after it, but while I was married I was faithful to it.”