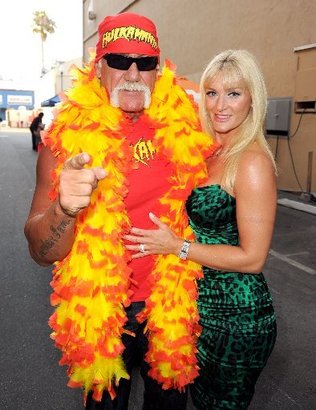 Yesterday we reported that Hulk Hogan’s security crew battled and bullied paparazzi trying to film his to wedding to Jennifer McDaniel from public property. Well now a police report on the main incident between photographer Robert Martinez and security man Ron Howard – which apparently mostly recorded on Martinez’s tape, claims that Martinez was in fact on private property and is seen choking and trying to attack Howard! While Martinez claims he was on public property when Howard harassed him, the police say that he was hiding behind bushes and appears to be on private property.

The officer also says that he hears Martinez threaten Howard by saying “I have a gun.” Well security man Howard did not want to press charges so police released Martinez with this tape but told him it better not be released. What right do the police have to say that unless the tape is evidence in a criminal case which is it not?

Radaronline reports: “I looked over the video in the camera,” Officer Martinez wrote. “I did see a quick glimpse of Martinez’s hand on Howard’s throat. But I cannot say if he put it there on purpose of by accident (sic) during the physical confrontation. I did hear Martinez state ‘I have a gun.’”

Martinez and his friends claim that Hogan and his security crew got favorable treatment from the local police – well this would not be the first time that a big celebrity got special treatment, would it?