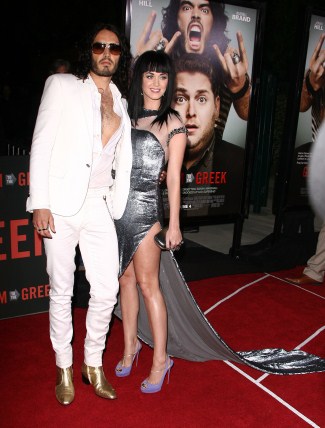 British comedian Russell Brand and Katy Perry are due to tie the knot in October but aren’t expecting any gifts from their guests because they are fortunate to be able to afford most things they want.   He said: "Given that Katy and I both have good jobs, we don’t want any presents. It would be a massive indulgence."

As well as forgoing a wedding registry, the ‘Get Him to the Greek’ actor doesn’t want his friends to throw him a bachelor party because he no longer drinks or takes drugs.   He said: "What would be the point? I’m not drinking, don’t do drugs anymore and I only sleep with Katy, so it would be more fun to just sit in an allotment and stare at a bunch of carrots."

While he doesn’t want some traditional aspects to his wedding, Katy recently revealed her fiance has become obsessed with bridal magazines in a bid to create the perfect day for their nuptials.   She said: "I’m not that obsessed with plans. But if we stop for breakfast, he has to stop and get ‘Bride’ magazine. It gets a little crazy."   Photo: Fame Pictures