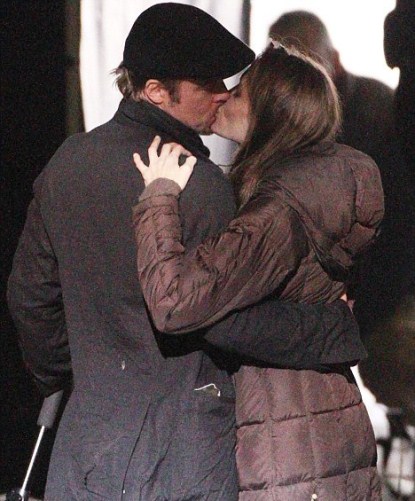 Angelina Jolie and Brad Pitt have been pretty lovey dovey lately, stealing kisses in Hungary during filming and his taking pictures of her on-set.

Reportedly, he only lavishes the extra affection on her when she’s expecting a baby with him. He has been seen getting closer to her with the public displays of affection lately.

A source said, “Brad has been strutting around like a peacock with a big grin on his face. When Angie pregnant, Brad treats her like gold.”

This is only a rumor at this point, that will likely drag on and on until we hear otherwise. Either that, or she’ll appear somewhere that has a bar and will only drink water, thus causing the internet to cave into itself with pregnancy confirmation stories.

We’ll let you know if we hear anything. About the rumored pregnancy, that is, not the water….we don’t care about that.