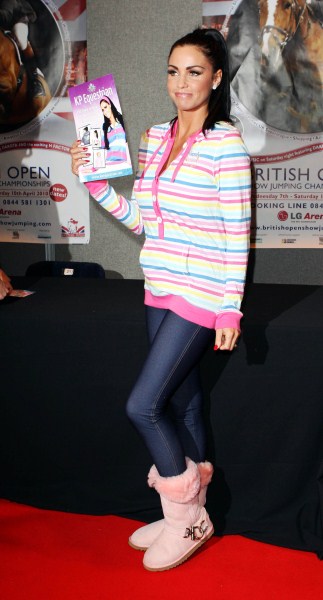 The glamour model has withdrawn from the event saying she has been advised not to run by doctors, sparking rumours she and husband Alex Reid are expecting their first child together.   Katie – who was set to take part in the 26-mile run in aid of the Vision Charity, which aims to raise money for the benefit of blind, visually impaired and dyslexic children – said in a statement:

“It is with great regret that I’m going to have to pull out of this year’s Virgin London Marathon. “Training has been going really well, and I was really looking forward to running again this year to raise as much money as possible for Vision, but I have been advised by doctors I should not compete this year.  “Fortunately I was part of a team who are still running for Vision so it would be great if you could still support them at www.justgiving.co.uk/danny-price. I wish everyone the best of luck.  “I know how hard this is so I have nothing but admiration for each and every runner… hope to see you in 2011.”

Katie’s seven-year-old son Harvey from a previous relationship is partially sighted and suffers from autism.   Last week, Alex – who married Katie in a surprise Las Vegas ceremony in February – refused to be drawn on speculation the couple are expecting a baby.   When quizzed on the subject, he said: “Maybe… maybe not.”   Katie ran the marathon with then-husband Peter Andre last year, finishing in just over seven hours.   The brunette beauty – who has two children, son Junior, four, and two-year-old daughter Princess Tiaamii, with Peter – later revealed she had suffered a miscarriage just days before taking part in the race.  Photo: Fame Pictures