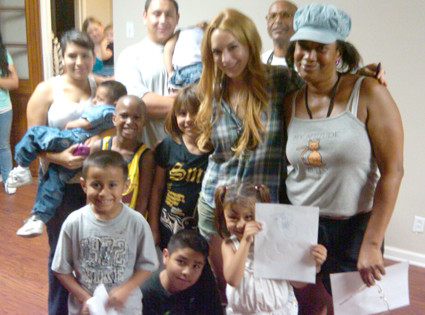 Just after getting out of jail Lindsay Lohan ostensibly went on a good deed.  Accompanied by her mom Dina and sister Ali as well as her business manager Lou Taylor Lilo dragged herself to the Dream Center, a Christian mission and outreach center in the Los Angeles Echo Park neighborhood. The Dream Centers are heavy duty hangouts in inner city neighborhoods dedicated to Christian Evangelism and charity work and as they say about themselves – we are dedicated unto the cause of inter-denominational and worldwide evangelism. The Dream Centers are likely to be found holding church services, involved in drug rehabilitation, charity work like food and clothing distribution, and even providing shelter for the homeless. The Church was founded by Aimee Semple McPherson in the 1920’s, an era when urban evangelism was very popular.

In any case it seems that Lou Taylor is a supporter of the Dream Center and asked Lindsay to drop in for a visit. While at the facility, Lindsay met with children and families, signing autographs and handing out purses to some of the teen girls. “What a great place The Dream Center is here in LA… had a nice time there today, it’s so important to give back. I feel blessed,” Lohan later tweeted.

Well we won’t complain about this visit – even if Lindsay was looking for some good publicity she did do a good deed. There is no reason that a celebrity should not get positive publicity for doing good things and charitable acts – even if the good publicity is the main reason they act charitably! To us it seems that Lohan is also taking the opportunity to get comfortable in the environment in which she is likely to spend the next few months while doing her rehab!