Is Snooki’s New Boyfriend With Her For Fame? 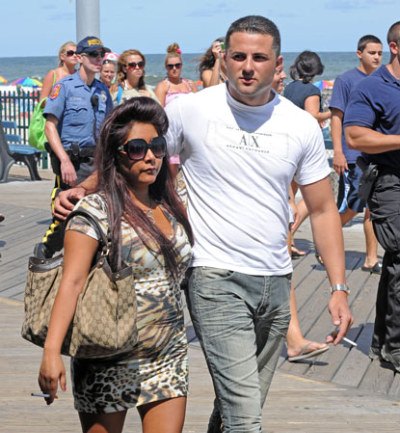 Snooki’s ex-boyfriend Emilio Masella doesn’t like her anymore and doesn’t seem to want anything to do with her. He even went as far as calling her a “whore”. But, still, he just can’t seem to keep her name out of his mouth.

Why? Because if she’s relevant, then maybe he will be, too. And it’s all because she’s the most famous pickle eating guidette this side of the Mason-Dixon line. She cheated on him with Vinny and he has a right to feel wronged, but to keep calling her names just seems childish. Grow up and move on, dude.

Now comes the question about her new boyfriend, Jeff Miranda. Does he only want to be with Snooks for the fame and recognition that comes along with dating a reality star?

Of their relationship playing out in front of the peering eyes of tens of people, he added, “I don’t care about the cameras. It’s about me and her.”

If I failed to mention the fact that he did also state that his dream is doing movies because he’s the “funny one”, then just call me forgetful.