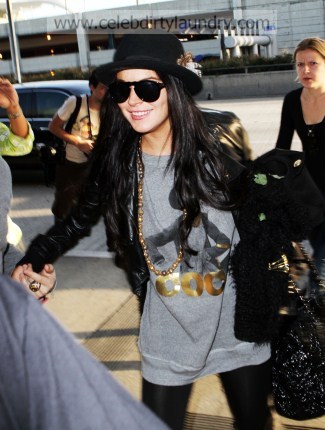 People around Lindsay Lohan think she is desperately in need of help.  As a matter of face as we reported last week her dad Michael Lohan – who is estranged from  Lindsay Lohan  claims he has bodyguards on standby in case the 23-year-old actress comes to any harm.   Apparently people have been trying to get her into rehab as her behaviour gets more and more erratic – with no success.

TMZ is now reporting that even the cops are worried about Lindsay.  Cops who see Lindsay at her worst — late nights and early mornings when she needs assistance avoiding the paparazzi — have been concerned about her "erratic behavior" and "attitude" — which have grown progressively worse over the last few months.

Her behaviour and condition bring to mind Britney Spears when she was more or less in the same condition.  Britney was lucky enough to have her Dad who took care of her. Lindsay on the other hand has crappy parents who are more concerned about themselves than her. Sadly, Lindsay seems to be too stupid to listen to anyone and thinks she is indestructible.   Sadly, she may find out soon this is not the case.  Photo: Fame Pictures