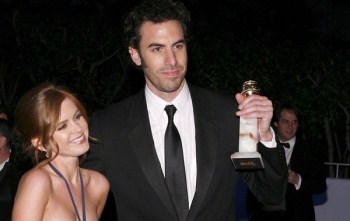 Isla Fischer & Sasha Barton – who have been together for eight years and have a two-year-old daughter, Olive, together – tied the knot in a “beautiful” secret ceremony in the French capital city last week, and Isla has described the occasion as “the best day of my life”.

The newlyweds decided they wanted a “no fuss” private ceremony and only told friends of their union in an email, according to Australia’s Woman’s Day magazine.   It read: “We did it – we’re married! It was the absolute best day of my life and in so many beautiful moments I missed you all so much. I thought of you as everything was happening, but Sacha and I wanted no fuss – just us!"

Isla and Sacha are believed to have wed in a traditional Jewish ceremony at sunset in front of close family members.   Last month, it was reported they were planning to wed on February 26, after sending out party invites asking friends to join them for a fancy dress party.   Australian actress Isla converted to Judaism to marry Sacha and admitted last year she was happy with her decision.   The ‘Wedding Crashers’ star – who has been given the Hebrew name Ayala or ‘Doe’ – said: "I love religions and find them fascinating and I find Judaism very beautiful. It has enriched my life enormously."