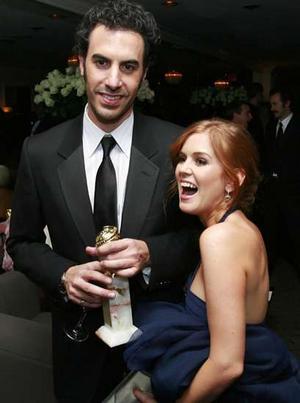 The couple – who already have a two-year-old daughter, Olive, together – were spotted out in London on Friday (10.09.10), pushing a pram meant for a newborn baby while little Olive walked in between her parents.

A representative for the couple said they will not be commenting on the reports but it is thought the new addition arrived earlier this month.  Isla and Sacha are notoriously private when it comes to their family life and even refused to confirm Isla was pregnant again, despite her being pictured with a huge baby bump.  In March, the couple – who have been together for eight years – married in a secret Paris ceremony and only announced their nuptials to friends in an email, which read:

“We did it – we’re married! It was the absolute best day of my life and in so many beautiful moments I missed you all so much. I thought of you as everything was happening, but Sacha and I wanted no fuss – just us!”

Isla and Sacha are believed to have wed in a traditional Jewish ceremony at sunset in front of close family members.  Australian actress Isla converted to Judaism to marry Sacha and she admitted last year she was happy with her decision.  The ‘Wedding Crashers’ star – who has been given the Hebrew name Ayala or ‘Doe’ – said: “

I love religions and find them fascinating and I find Judaism very beautiful. It has enriched my life enormously.”