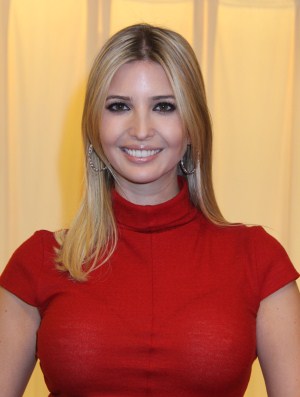 Ivanka Trump has a stalker? Amazing isn’t it. What self respecting psycho would stalk a nobody like Ivanka Trump?  Her entertainment fame extends only to her trivial role on her father Donald’s absurd TV farce, Celebrity Apprentice and her entire business experience is as one of her dad’s vice-presidents at his real estate firm.   How do you spell NEPOTISM?

Ivanka Trump is an obnoxious entitled talentless snob – and her stalker, Justin Massler, must be paid big bucks by Donald to stalk his cosmetic surgery Frankenstein of a daughter.   In fact the only thing worse and more pathetic than Ivanka is her brother, the total loser, Donlad Jr.   You have to have as very very boring empty life to watch Donald Trump and his ugly children stink up Sunday night television.  Photo: Fame Pictures