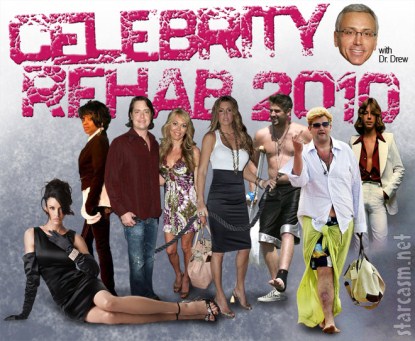 Dr. Drew Pinsky might consider another line of work – Supermodel Janice Dickinson says that she felt like killing herself while in his rehab filming for the show Celebrity Rehab 4.  She wanted to go to the bathroom to hang herself because she felt so poorly while detoxing from alcohol and prescription meds.  I don’t know what Dr. Drew and his “therapists” actually do to help the patients but to us it seems like what he cares about most is making good television to help his ratings.

Via Daily Mail : ‘I’m having thoughts of suicide,’ she says while gasping for breathe. ‘I wanted to go to the bathroom and try to hang myself. I want it to… end.’    She says that she ‘slipped’ after years of sobriety, adding that ‘the shame is overbearing.’  ‘It’s really painful,’ she continues. ‘It’s very painful.’  Her counsellor tells her: ‘You’re going through the toughest part of your life right now, the fight for your life.’

Rehab is a time for self-renewal and making people feel better – not being so negative that they want to die.  Last season we watched former Alice in Chains bassist Mike Starr fight so much with one of the dumb therapists that he was ready to quit rehab – and this was after he was well over his addiction and withdrawal from heroin!

Apparently Dickenson has a fist fight with Rachel Uchitel on the camera!  What a circus!

Dickenson goes through the typical addict’s litany of complaints – claiming she was physically, sexually, and emotionally abused by her dad.  Strange how these terrible issues never prevented her from having a super successful career in the high pressure fashion industry?

In the end any addict can find issues that they claim explain their addiction.  Guess what?  Nobody cares – only the desire for a good sober life will keep an addict sober and clean.  After detox and withdrawal only the addict is responsible for their sobriety – looking at the past and blaming others for one’s own behaviour can never work.