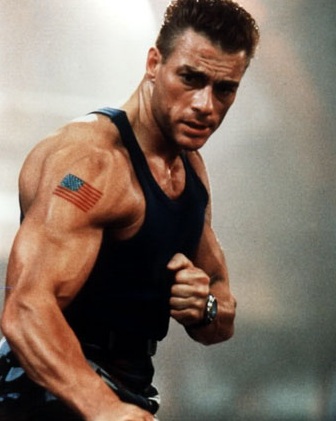 Imagine being a martial arts hunk – an athlete with a super physique amazingly muscular with low low body fat – and only 50 years old with millions of dollars to your name!   Well that was Jean-Claude Van Damme yesterday.   Today we see an older man who’s insides are corroded, who has a heart that has partially died and is forming scar tissue – it will no longer be able to feed his body with an adequate blood supply, he can no longer run and fight.  In one day Jean-Claude Van Damme has turned from a beautiful physical specimen the envy of all, into an old man, dying on the inside, who will never again be the hunky stud of martial arts films.   Yes, believe it or not Jean-Claude Van Damme suffered a heart attack one day after his 50th birthday while filming a movie in New Orleans.   He was admitted to hospital in New Orleans briefly before being released and returning to Belgium

And how did this happen?  Easy, in one word – STEROIDS!  Van Damme was a big anabolic steroid user and that was how he developed and maintained his hard, lean and muscular physique.  But when used excessively, as in Van Dammes’ case, anabolic steroids lead to swollen and stiffened parts of the heart muscle, typically the left ventricle.  This left ventricle hypertrophy leads to an inefficient cardio-vascular pumping mechanism and a vastly increased chance of heart disease.  The list of people who have had pre-mature heart disease as a result of steroid abuse is extensive and includes the great Arnold Swarzenneggar who had heart valve surgery several years after he stopped using steroids while a professional bodybuilder.

So let this be a lesson to all those young men who think steroids provide a shortcut to a stunning physique – they do – but they often cost you your heart’s health.  Is it worth having a bit larger biceps and a bit less body fat at the price of a major heart attack?   Obviously not!