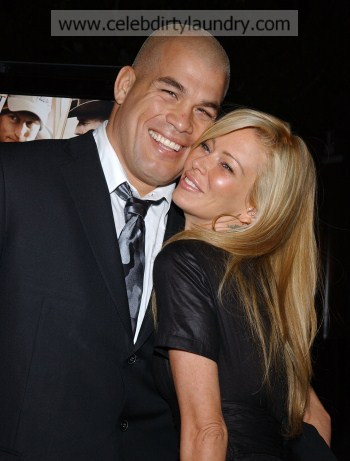 Tito Ortiz the former Light-Heavyweight UFC Champion was arrested this morning for beating up his ex-porn star girlfriend Jenna Jameson. When police arrived at the couples’ home in Huntington Beach, California they arrested Tito because there were visible injuries to Jenna.  When Tito gets out of jail he won’t be going home because Jenna has filed a restraining order against the muscle-headed steroid abuser.

Now we all know that every couple argues periodically and even gets into ‘fights’ but physically assaulting one’s mate, in Tito’s case the mother of his twins, is in a separate and horrid category.  Ortiz is a moron who can barely string together a sentence – he has a hugely distended and thickened jaw which is typical of long-term human growth hormone and anabolic steroid abuse – and this trained killer attacked his little delicate girlfriend?   The entire concept of vicious unarmed combat – mixed martial arts (MMA) they call it – promoted by the UFC, which generally leaves one or both combatants bloodied and broken, with their brains concussed, is barbaric.   In fact many states will not grant licenses to the UFC or other MMA groups because of the extremely violent nature of the so-called sport. The idea of two people getting into a ring together and proceeding to try to punch, kick, knee, elbow, choke, strangle, break the arms and legs, and do all sorts of other nice things to each other until one of them either submits, gets knocked unconscious, or is too disabled, bloodied and battered to defend themselves should not be called a sport. UFC/MMA is no sport – it simply appeals to the worst and least human (and humane) elements of what our species is.

Of course Tito Ortiz is not the only brute who has taken his illiterate frustration out on a much smaller and weaker person but in his case the true nature of the UFC and MMA in general has been exposed. Tito Ortiz – what a loser!   Photo: Bauer Griffin