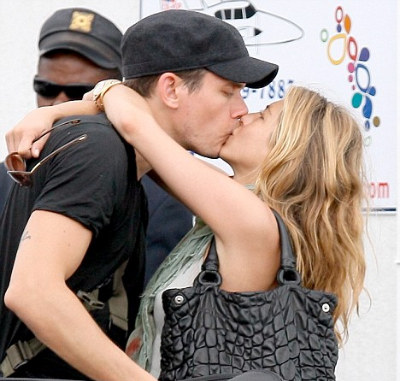 It just seems to me that Jennifer Aniston and John Mayer can’t seem to keep themselves away from each other.

In the midst of shooting her new movie Wanderlust with Paul Rudd, Jen happened to wander on over to Lakewood, Georgia to hang out with John. Wednesday night, John was playing a show at Aaron’s Amphitheatre.

Jen tried to play it low-key, wearing workout clothes and a baseball hat, but snitches on scene knew it was her. A spy said, “She looked gorgeous and seemed to be really enjoying herself. She and John laughed a lot.”

After his performance, Jen, John and several of his tour workers went to her hotel for a bit of a party. John headed off to his next tour stop in Tampa, Florida, but that’s really only about seven or eight hours out from Georgia, so it’s feasible that she may have followed him there.

Reportedly, these two keep hooking up all over the place. I think they never broke up and she gave him another chance as long as he was able to keep his big trap shut about it to the media.