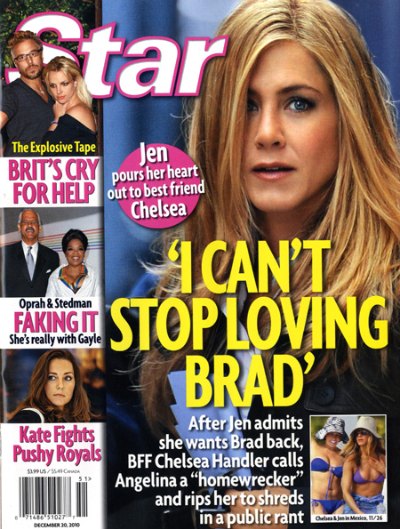 These tabloid magazines are really batting a thousand this past two weeks, aren’t they? First the National Enquirer concocted a story about Jason Trawick beating the crap out of Britney Spears. Before that, they reported that Michael Douglas was about to die, and now Star magazine is taking the cake with their story of Jennifer Aniston and how badly she whined about wanting Brad Pitt back. Will this ever end?!???

It’s been five years since their split – SHE’S OVER IT! How come people can’t seem to get that through their heads?

It’s almost as if they knew magazine sales were slacking, so they wanted to have a sure thing to push magazines. Ugh. They also want us to believe “After Jen admits she wants Brad back, BFF Chelsea Handler calls Angelina a ‘homewrecker’ and rips her to shreds in a public rant.”

I can imagine if Jen and Chelsea have been friends for years, then Jen has probably said some not-so-nice things about Angelina. I would, too, if I were in her shoes. But why are they hanging on to the Brad-Jennifer-Angelina triangle?!??