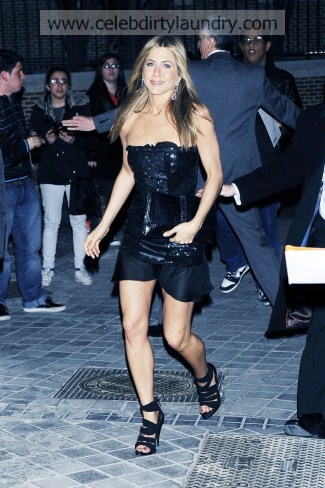 The former ‘Friends’ actress was completely surprised when her pal and co-star bared all for her latest drama series ‘Cougar Town’, where she plays a woman who embarks on a series of romances with younger men.   Despite her insecurities, Courteney – who has a five-year-old daughter Coco with her husband David Arquette – wanted to shoot the scenes because she felt it was important to show what real women look like.

She said: “I think it was an important thing to do. This show talks about real things and real experiences, so I think I had to. I know my friend Jennifer Aniston was shocked I did it. Some people may not want to show parts of them that are not the very best and that’s alright. I decided to show, and I don’t care. It was important to show the real side of being 40.”   While she was happy to expose her body on screen including flaws, Courteney tries hard to minimise her imperfections with a strict exercise regime.

She explained: “I try really hard. I walk, I run, I do elliptical, I do band work, weights and dance aerobics. I play tennis and I eat really well… But I was also lit very well. Don’t mistake Hollywood lighting for reality!”  Photo: Fame Pictures